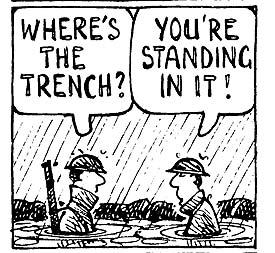 January 30th Advertising Age posted an article about ageism. Too late for the gray-hairs. I seem to recall everyone over 50 (maybe it was 40, but it seemed like 50 when I was 20) was fired for making too much money. Now it’s too much or not enough of something else.

I learned that lesson the hard way. Here’s my response posted to Ad Age just now:

I worked in advertising at the big creative agencies on both coasts for more than 18 years. When I hit 40 and was living in L.A. at the time, a well known ad agency owner looked up from his desk and said “I wouldn’t hire you ever no how no way”. When I asked why he said, “I can get someone half your age to work twice as hard for half the money”.

Now that was a slap in the head with a two by four, no doubt, not to mention illegal, but he was only saying what they all thought and didn’t want to say. It took a recruiter to sit me down and explain ageism to me.

Ironically, it was only then that I realized the only way to keep working was to keep reinventing myself in the digital world. I got a lowly job in a think tank in the Venice CA tech hub. Once there, I felt about zeros and ones the way once felt about film. I was a sponge for technology and because there was nothing but new ground to cover, pulled out the stops, learned and accomplished things I would have been prohibited from doing in the Agency world.

While I love and respect my colleagues and value the experience in advertising, digital technology was the journey I seized and am still on. I am an award winning blogger, a sponge for all things digital and a well respected electronic commerce marketing specialist. TOTALLY SELF-TAUGHT.
In this new industry there are no holds barred as long as you are willing to stick your neck out and hit the trail.

iThere are no comments