For Mr. Kincaid, the evidence seemed close at hand; he overheard conversations through his boss’s open office door about which foreign contractors should take over which jobs at the automobile finance company where he worked. He remembers the meeting where an executive mused that perhaps the whole department could be shipped to India. He wondered how much notice he would get, and what his severance would be, and how he would tell his wife.

Mr. Kincaid didn’t need to have that conversation. He kept his job. While he later left the company, he has remained steadily employed a decade and a half later. And the broader jobs apocalypse never materialized.

Companies did move millions of office jobs to India, the Philippines and other places where they could pay workers less. But those job losses were more than balanced by growth elsewhere in the economy.

A widely covered 2007 study by Alan S. Blinder, a Princeton economist and former Clinton administration official, estimated that a quarter or more of jobs were vulnerable within the next decade. But many companies discovered that labor savings were offset by other factors: time differences, language barriers, legal hurdles and the simple challenge of coordinating work half a world away. In some cases, companies decided they were better off moving jobs to less expensive parts of the United States rather than out of the country.

“Where in retrospect I missed the boat is in thinking that the gigantic gap in labor costs between here and India would push it to India rather than to South Dakota,” Mr. Blinder said in a recent interview. “There were other aspects of the costs to moving the activities that we weren’t thinking about very much back then when people were worrying about offshoring.”

In his 2007 paper, Mr. Blinder scored occupations on a 1-to-100 scale based on how easily they could be sent offshore. Bus drivers and electricians scored near the bottom. There is pretty much no way to do that work from afar. On the other end of the spectrum were computer programmers and telemarketers — jobs that in many cases were already being sent overseas.

In a follow-up paper released Friday, another economist, Adam Ozimek, revisited Mr. Blinder’s analysis to see what had happened over the past decade. Some job categories that Mr. Blinder identified as vulnerable, like data-entry workers, have seen a decline in United States employment. But the ranks of others, like actuaries, have continued to grow. 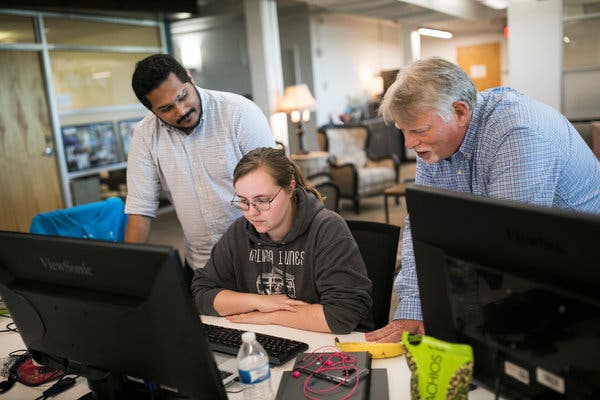 Over all, of the 26 occupations that Mr. Blinder identified as “highly offshorable” and for which Mr. Ozimek had data, 15 have added jobs over the past decade and 11 have cut them. Altogether, those occupations have eliminated fewer than 200,000 jobs over 10 years, hardly the millions that many feared. A second tier of jobs — which Mr. Blinder labeled “offshorable” — has actually added more than 1.5 million jobs.

But Mr. Blinder didn’t miss the mark entirely, said Mr. Ozimek, who is chief economist at Upwork, an online platform for hiring freelancers. The new study found that in the jobs that Mr. Blinder identified as easily offshored, a growing share of workers were now working from home. Mr. Ozimek said he suspected that many more were working in satellite offices or for outside contractors, rather than at a company’s main location. In other words, technology like cloud computing and videoconferencing has enabled these jobs to be done remotely, just not quite as remotely as Mr. Blinder and many others assumed.

One telling example is call centers. Telemarketing jobs have declined sharply in the United States since 2007, as much of the work was sent overseas. But the number of customer service representatives has continued to grow.

The two occupations may seem similar. But the different employment trend may reflect both cultural and logistical differences. Telemarketers are essentially selling products and often working from a script. Customer service and other call-center work like tech support often require a more nuanced understanding of the customer experience.

Deb Thorpe, senior vice president for operations for Kelly Services, a staffing company, said that rather than move customer service jobs abroad, many companies were trying to find cost efficiencies by putting offices in less expensive parts of the country or letting workers take calls from home.

Mr. Kincaid, now 59 and living in Columbus, Ohio, has seen all those patterns up close.

Shortly after his own near miss with offshoring, he was hired by another American company to manage a team of programmers in India. It didn’t go smoothly: The Indian workers were skilled, but the time difference and the distance made it hard to collaborate. He eventually told the company that it would be better to bring the work home.

Mr. Kincaid’s current employer, Nexient, develops software for companies on a contract basis — work that is a prime candidate for outsourcing. But all of Nexient’s employees are in the United States, which the company uses as a selling point with its clients.

Mark Orttung, Nexient’s chief executive, said that offshoring worked fine for certain types of work, such as short-term projects, but less well on projects where requirements change over time and collaboration is more important. American workers can also have an edge on projects that require them to understand the specifics of the business: how the American health care system works, for example, or what customers expect from a particular brand.

“When we work with a large retailer, most of our employees probably shop at that retailer,” Mr. Orttung said.

Nexient is based in the San Francisco Bay Area, but most of its employees are in Columbus or in Ann Arbor, Mich. Both are college towns, with plenty of young graduates with technical skills. They are in or near metropolitan areas with big companies that are sources of more experienced workers. And they are much cheaper places to live than Silicon Valley.

A growing number of companies are shifting operations to cities like Columbus, said Susan Lund, who has studied the future of work for the McKinsey Global Institute, the consulting firm’s think tank. No American location can compete directly with India on labor costs, she said, but shifting jobs elsewhere in the country can narrow the gap.

“The companies that started the offshoring trend were largely based in Manhattan or the West Coast, in the very high-cost places, and they realized that, hey, there are a lot of other places in the U.S.,” she said.

The evolving thinking on offshoring could carry lessons for another much-discussed threat: automation. In recent years, economists and technology experts have warned that rapid improvements in artificial intelligence, robotics and related fields could endanger a huge share of jobs — often using terms that echo the offshoring debates.

Ms. Lund said she saw parallels between offshoring and automation: Both trends threaten one set of jobs but should make the overall American economy more productive, creating new job opportunities, albeit ones requiring different skills. And she said the pace of change should allow workers, companies and governments to adapt.

“The lesson is, change is evolutionary, not revolutionary,” Ms. Lund said. “There’s not mass movement of jobs anywhere. And because it’s a slow change, it gives people and companies a chance to adjust so we never saw the mass exodus of jobs to India.”

Ben Casselman writes about economics, with a particular focus on stories involving data. He previously reported for FiveThirtyEight and The Wall Street Journal. @bencasselman

iThere are no comments